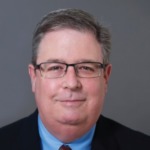 If you were following Washington State politics during the last election cycle, you may remember Chris Vance. He’s the former Washington State Republican Party Chairman who ran against Patty Murray for U.S. Senate. Despite a condescending video he recorded to open his campaign (which seems to have been scrubbed from the internet) in which he insulted the traditional GOP base, I voted for him based on the assumption that no one could be worse than Patty Murray.

I may have been wrong. Okay, maybe not, but I have questioned my vote in recent weeks.

While I share many positions with Vance on a variety of issues, mostly concerning national defense and the national debt, I’ve come to believe that he’s among the worst of politicians…the moderate Republican who’s still trying oh, so hard to be accepted by the cool kids where all the cool kids in the cafeteria are liberals. To put it another way, I once read that the difference between a pop star and a rock star is that the pop star wants to be beloved by fans and a rock star doesn’t give a damn. Vance is a pop star and the fans he’s courting aren’t conservative Republicans. 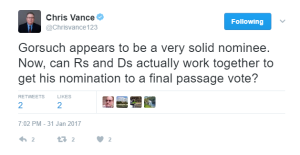 Vance’s post-election twitter feed is all Republican bashing all the time. I’m not exaggerating! Even when he offered a weak admonishment to the Democrats to confirm the Neil Gorsuch appointment to the Supreme Court, he included Republicans to soften the blow. As if there were anything the GOP could do to cause Democrats to be less obstructionist.

And if he’s not bashing Republicans, he’s attacking one of the foundations of the republic, the electoral college. He’d like to be able to vote to abolish it and he’s so passionate about it that he mentioned it twice on public radio in the space of a month.

Vance has also, predictably and very publicly, come out in opposition to President Trump’s immigration executive order. He’s so opposed, in fact, that he joined the protest in Seattle. 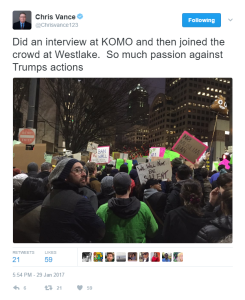 Which is fine, of course. It’s his prerogative to spend his time and exercise his right to free speech in any way he wants. Which includes, I guess, joining the ACLU, also in response to the immigration order. 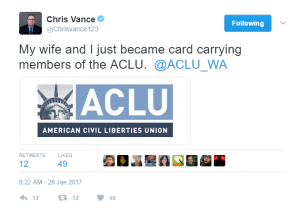 Also his prerogative. I guess he doesn’t mind if they’ll use his membership fees to advance their leftist anti-voter ID, pro-affirmative action, anti-law enforcement agenda if it makes him feel good about his position on Trump’s executive order.

It doesn’t end with his Twitter account, either. He’s started a blog, “Wide Awake.” In his second post, he makes the assertion that the major threat to freedom today comes from the right. He cites the rise of Putin in Russia. I agree; Putin is a threat. Putin is a fascist, he says. Okay, sure, maybe he is. (I don’t agree that fascism is a right wing ideology, but that’s an argument for another day.)

But then he goes on to tie this back to U.S. politics. He implies that Trump and those who voted for him have fascist tendencies. (I disagree again; I believe that Trump, at least, is a populist, not a fascist.)

He brings up racism and Islamophobia and the demonization of immigrants. These are predictable straw men used against conservatives, but commonly by Democrat politicians and progressive activists (but I repeat myself), not by Republicans eating their own.

By now it’s probably obvious that Chris Vance isn’t my favorite Republican and you may be wondering why I’ve gone on this extended rant rather than just ignoring him. Let me ask you this. Would you choose to let cancer eat away at you from within if there were anything you could do to stop it?

Chris Vance is a cancer eating away at the Washington State Republican Party. His favorite pastime is bashing other Republicans, and he does so at a variety of left-leaning places who keep him around like a pet they can trot out when it suits their agenda. He undermines and weakens the GOP at a time when we should be working to unite the party in Washington. He may think his anti-republican position will curry favor with local voters, but I have to point out that Patty Murray posted the largest margin of victory of her political career over Vance.

Like his successor at the WSRP, Luke Esser, who now lobbies for the SEIU and makes contributions to Democrat politicians, Vance seems to be leaning ever closer to the dark side.

Which brings me to my final point.

So, Chris, if this is the only thing holding you back, get over it and go. Please. You’re not helping the WSRP and your disdain of the conservative Republican base is palpable. Frankly, I’d be embarrassed if you claimed to be speaking for all Republicans and I cringe over your willingness to chastise. So just go already. The last thing we need is a frenemy like you.

One response to “Frenemies”