A Strategy For GOP Success

It appears as though Wisconsin Supreme Court Justice David Prosser has won reelection to the Wisconsin Supreme Court over challenger and union darling Joanne Kloppenburg after a reporting error was discovered in Waukesha County. The correction represented a net gain of over 7,500 votes for Prosser in a race where only yesterday Kloppenburg was leading by 204 votes. Cross your fingers that the lead is outside the margin of fraud.

Waukesha County Clerk Kathy Nickolaus said Thursday that she failed to save in her computer and consequently report 14,315 votes cast in the city of Brookfield, omitting them entirely in an unofficial tally released after Tuesday’s election. The new totals give 10,859 more votes to Prosser from Brookfield and 3,456 more to Kloppenburg, she said. Smaller discrepancies turned up in two other communities as well.

If Prosser’s new lead holds, – and there’s more than a good chance it will as a Democrat canvass watcher confirmed that the votes are legitimate (H/T @Jake_W) – it will be cause for hope for Washington State conservatives, whose electoral failures in close contests have occasionally garnered national attention. The “keep ’em counting” strategy employed during the 2004 gubernatorial race that resulted in Christine Gregoire winning the governor’s mansion over Dino Rossi served as a template for Al Franken’s win in Minnesota in 2008.

Now it appears that Kathy Nickolaus has inadvertently hit on a strategy that can be used as a template in states like mine where one densely-populated and heavily liberal county (do you hear me, King County? I’m talkin’ to you!) wags the political dog. Each of the other counties can simply withhold the vote totals from one (or two!) of it’s most conservative precincts, thus confounding those tasked with “finding” the votes needed to squeak out a win in a close race. Imagine the confusion! How many is enough? How many is too many?

When Racism Isn’t Racist At All

Well. This Was Unexpected.

Charlie Sheen: Proving Yet Again That Having It All Doesn’t Necessarily Mean All That Much

Thanks, Patty…Way To Boost The Economy

How The Hell Did Paul Krugman Get To Be So Stupid?

I had the opportunity to pass by the defaced campaign signs that Bryan Myrick first reported on. The first thing I noticed was that the Dennis Richter signs, which were mostly intact in Bryan’s photo, had been destroyed. Someone had also added a hand-lettered sign: “Vandals Support Democrats, do you?” (Sorry, no photo…I was driving.)

It’s also worth noting that the destruction isn’t limited to just this one location; The location in these photos is just north the King-Snohomish county line, but I’ve heard it’s happening all over King County.

How very sad and pathetic is it when the best way someone can think to support his candidates is to vandalize their opponents’ campaign signs? 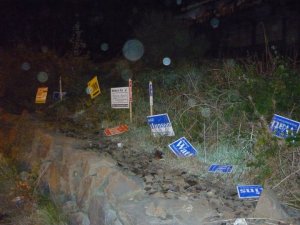 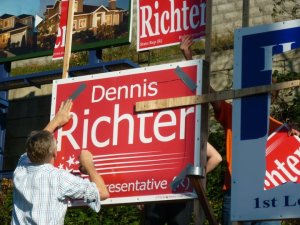 Update 1: From the Richter campaign. (This is a Facebook note, so I’m not sure if everyone can see it or not.)

What do you suppose it really means when Patty Murray says, “In these tough times, every penny counts.” Based on her record, I can only assume she means Congress should milk the taxpayers for every penny they can get. God knows she’s never given any indication she’s willing to cut spending by so much as a penny.

For the first time this election cycle, Republican challengers are leading in ten Senate races in the latest polls.

I thought earlier today about how good it felt when this happened. I literally wept with joy that day. This year could be even better.

That’s not to say we can count our chickens before they’re hatched. Election day is just under four weeks away and who knows what can happen, but at this point, things are trending in the right direction. Dig deeper; give until it hurts and work until you drop.

Update 1: The latest Rasmussen poll puts Sharron Angle up by 4%, right at the margin of error.

Update 2: The latest Rasmussen poll puts Dino Rossi up by 3%.

Update 3: The latest Rasmussen poll puts John Raese up by 6%.

Everything Clint Didier Needs To Know About Dino Rossi

Everyone knows by now that Clint Didier, despite having made it very clear during the primary season that he would support the GOP nominee, whomever it might be (and knowing that it could very well be Dino Rossi), has withheld his endorsement from said nominee. Rather than getting wholeheartedly behind Rossi, Didier chose to enumerate three conditions upon which his endorsment would be based.

I understand the issues involved are important to Didier – heck, they’re important to me! – but I think he may be failing to see the forest for the trees. (I wanted to use some really clever football lingo there, but, yeah. I don’t know anything about football.) So let me clear things up for Clint a bit and tell him everything he needs to know about Dino Rossi in order to feel good about an endorsement.

Here it is in a nutshell:

Yes, it really is that simple. Sure, we’d all prefer to vote for a candidate who shares all of our views and excites us with fiery rhetoric, but in the absence of that, we have to act like adults and ask ourselves, “What’s better? Something or nothing?”

According to a new Rasmussen poll:

The latest Rasmussen Reports telephone survey of likely voters in the state shows Murray earning 45% to 48% of the vote, down just slightly from a month ago. She runs best – with 48% support – against her two strongest GOP challengers, Dino Rossi and State Senator Don Benton. Incumbents who earn less than 50% support at this point in a campaign are viewed as vulnerable.

Are these latest numbers, which show Rossi polling behind Murray,  going to push “Dunno Dino” (thanks, @ElkMom) in or out?

An Excess Of Candidates

We have so many GOP candidates for U.S. Senate here in Washington that I can honestly say I’m not sure that I can name all of them. Off the top of my head (in alphabetical order):

Do you see who’s missing? That would be Dino Rossi, the non-candidate who puts so much fear into Patty Murray that she has sicced her DSCC attack dogs on one of her constituents. Nice. Way to represent, Patty.

Honestly, the entire state is in a state. A state of limbo, that is. This far into the election cycle, Rossi’s indecision begins to seem like one of two things: timidity (I just need a few more polls showing me in the lead…what was that noise!?!) or arrogance (Hey! I’m the Rossi! I can get in any time and voters will flock to my banner.). Either way, he’s doing a disservice to the to the voters and to the candidates who have been willing to make a commitment.

Looking back at that list, you may notice Rossi’s not the only thing missing from the list of candidates. With the exception of Don Benton, the candidates are entirely lacking in political experience. To be honest, I don’t think that’s going to be a huge issue this campaign cycle – anti-incumbent sentiment is running high – but also absent is state-wide name recognition.

Voters are highly motivated but you can’t blame them for waiting to see what Rossi decides before opening their purse strings. Who wants to make a hefty donation to a candidate who’ll be knocked out of the running by a late entry?

It’s time for Rossi to put an end to the speculation one way or another, whether to free up campaign funds and volunteers for other candidates or snap them up for his own campaign. Or just shoot us and put us out of our misery.

Democrats New Campaign Strategy Is A Sure Winner

Democrats are unveiling new strategy of campaigning against potential challengers rather than actual candidates. You can hardly blame them; they haven’t had that much success lately against real candidates in places like New Jersey, Virginia and Massachusetts. Apparently they’re afraid the trend could continue in Washington.

Witness the DSCC’s new website spoof, Dirty Deals Dino. Recent polls have shown Rossi holding a narrow lead over Murray in a hypothetical matchup and the DSCC appears rattled. For his part, Rossi denies the allegations and has asked the Murray to call off  her dogs.

And a second spoof campaign website, Rob McKenna for Governor, paid for by the Washington Democratic Central Committee.* I’m guessing this one is for the benefit of Jay Inslee; surely Her Royal Highness Christine Gregoire wouldn’t be so foolish as to run again, with approval numbers in the 30s. Then again, taking her math skills into account, maybe she would.

I’m not saying that Rossi won’t run; personally I think the chance of him entering the race is better than 50/50. Likewise, it’s no secret that Rob McKenna would like to be governor but what’s the rush? Yo, Democrats, feeling a little jumpy? I mean, Washington won’t elect a new governor until 2012!

I think that by jumping the gun on the attack websites the Democrats may have revealed a little more than they intended about how vulnerable they’re feeling. It’s time for Republicans to press their advantage.

Update 1: Pudge at Sound Politics has some thoughts on this issue.

*Return with me now to the days of yesteryear, when the Soviet Union was a world superpower and central planning reigned supreme.